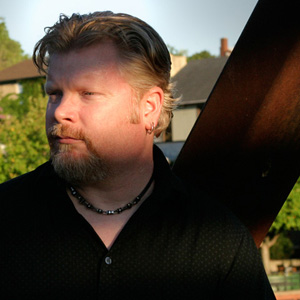 "I wanted to write songs and sing like Michael Been from the Call, but I wanted the raging guitars of Bob Mould, Gym Nicholson and Geordie Walker to be behind it all." - Dann Gunn

"In the late 80s and early 90s, there were tons of bands that were heavy on both guitar and conventional melody," he says. "I could relate to the singing of a passionate song married to an equally passionate guitar."

Dann also wanted it to all mean something - something spiritual and cathartic while connecting with others. Having felt that his inner life had profited from the thoughts and words of other artists, he felt the need to 'put something back'.

Dann learned how to sing and about the writing process while working with his first band, The Square. The members of The Square played multiple gigs across the US and learned the ins and outs of recording together.

In 1994, Dann released the album "...sane" on R.E.X. records with his second band, Velocipede. The 'Pede was a heavy-riffing two-man band, years before the White Stripes and Black Keys were accepted by the mainstream.

At the time, most people simply found a power rock duo to be a little perplexing. The resulting lack of label support or promotion pushed Velocipede into obscurity, even while they had songs charting on indie radio.

After putting a great deal of energy into Velocipede for several years, Dann decided it was time to become a 'solo' artist. "I no longer felt like I could work within a group mentality", he explains, "but I still had songs to get out.."

Since "...sane", Dann Gunn has sporadically recorded and performed his starkly minimal and driving music, producing four projects in the process. "Where The Story Goes" (2015 - recorded with tin cans and string), "Easy" (2009 - with Nick Hetzler on guitar and production by Ed Sharpe), "Floating, Spinning, Upside-Down" (1999 - recorded on Mercury Ave. with Ed Sharpe) and "...losing steam" (1997 - recorded at Dolarosa with Chris Colbert).

Dann has written all the songs for these projects, as well as playing bass, guitar, singing and (more recently), programming. Other musicians have included the incredible Jeff Bradshaw (Love Circle Logic) on drums, and Nick Hetzler on guitar (Easy). Live performances often featured guitar monster Michael Johnson and drummer Jeff Brown, who is now the 'go to' guy for drums in Nashville.

Dann always jokes that making music is 'cheaper than therapy', but there is more than a shred of truth to that statement. Creative people need outlets. Dann now lives with his wife Jenn and family in the Chicago area and has found himself in a bit of a larger world with more opportunities. Plans for more recordings and live shows are underway. He still desires to 'put something back' - to contribute to the positive, visceral impact that music makes on listeners.